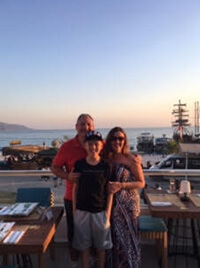 Suddenly on 9th October 2019 in the arms of his beloved wife, Wayne aged 49 years of Worsthorne. The devoted and much loved husband and soulmate of Kathryn, loved dad ‘bab’ and best friend of Leo, an adored son, brother and friend of Lee and also a loved relative and friend to many. Wayne also leaves his beloved Max ‘the Westie’.

Most of all Wayne was a family man, he doted on his family and did everything he could to provide for them. He worked hard starting his career as an engineer working in aerospace and later as a financial advisor at Britianic Assurance where often he was awarded salesman of the month. Over the last couple of years Wayne began working for himself under the umbrella of True Potential, this was when Wayne really came in to his own, hew grew his client base to one hundred and was a highly respected  ‘Wealth Management Partner’. With his keen eye for detail and meticulous planning skills, Wayne built himself his very own office in the garden at his beautiful home, this was a space that he was very proud of and could often be found working away with his beloved dog Max by his side. An avid Burnley FC supporter and season ticket holder, Wayne loved to attend the matches to watch his favourite team. He was his his son Leo’s biggest fan and always looked forward to watching him play football.

Wayne loved nights at home with his family, and these would often turn in to ‘music night’ when the family would enjoy listening to each others favourite songs whilst enjoying a drink and a take away. Holidays were always looked forward to and  the family loved nothing more than getting away to there favourite destination Cyprus.