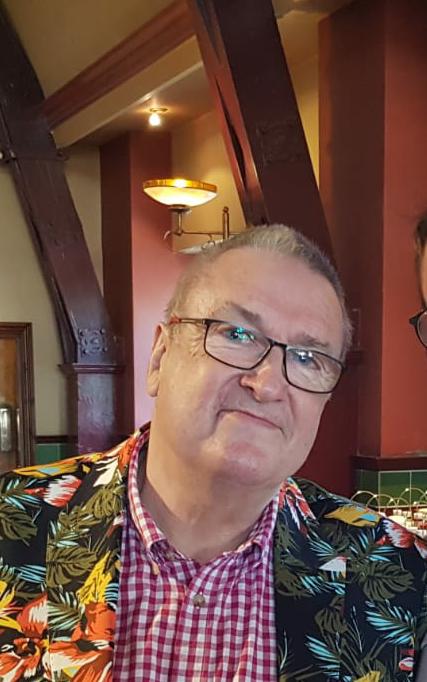 On 20th August 2022, Paul died suddenly at his home, aged 68 years of Chorlton. Very dear former husband to Maggie, much loved dad of Paddy, Ciaran, Ruaidhri and Connor, dear father in law of Anna and Sophia, loving granddad to Louis, Florence, Aoife and Ned also a much loved brother, brother in law, uncle and much loved family member.

Paul began his working life as a lawyer and went on to specialise in employment law. With a great sense of justice, Paul was an incredible advocate for the underdog. He was gifted with an ability to really connect with others and was a warm, likeable and popular gentleman loved by so many. It was important to him that you were happy and he loved to help you with your problems – even though he was the most non PC person, but this only served to make everyone love him more. Paul was the best kind of friend to have and he always had your corner. In his early years, he played rugby and also refereed local matches before moving into the world of football, refereeing for local teams – proud as punch when doing so at the senior games at local level. An all round sports fan, Paul particularly enjoying the cricket and football, especially his revered Manchester United. He loved trips to the theatre and enjoyed listening to music.  Ireland was one of his favourite places and many happy holidays were taken there whilst the boys were growing up. A proud and happy family man, he always kept up to date with his young grandchildren. Paul lived a life based on Christian values and will be remembered with love and affection.

Donations can be made in memory of Paul on behalf of The British Heart Foundation or Leukaemia UK by clicking the ‘Make A Donation’ button at the bottom of this page.

Please feel free to leave a message for Paul’s online memorial book by completing the form below.

I remember uncle Paul as a big man when I was a child. I remember him coming to Ireland and visiting with the boys and Maggie. Fun times. As I grew older and social media came he always was interested in what I did in my life and my family’s life. Always gave encouragement and praise. Had great conversations with him at conner and Sophia’s wedding, that was a great day. May you be flying high uncle Paul and resting in peace. So so sorry for your loss . Lots of love xx

A mad Red therefore an automatic top bloke. All my love to the family and especially to my good friend, Ruaidhri. X

Wishing you all peace during this time of mourning and hope to see you soon. May he rest in peace.

Paul was all of the above and more. He always had an ear ready and waiting to listen and offer advice. He helped me many years ago and gave me the confidence to make a massive change in my life. Many ‘ just 1’ in spoons on way home from work turned into 5 or 6!! Like Paul I didn’t need much persuading. God bless and RIP Paul. Xx

Very sorry to hear of Uncle Paul’s passing – I remember his warm and fun and generous nature even while we exasperated him as silly kids. Rest In Peace.

Our deepest sympathy to Maggie, ,Paddy, Ciarán, Ruaidhri and Connor and the extended Cunningham family on the passing of Paul, May he rest in peace 🙏

Best friend any body could have. I will miss him greatly.

My deepest condolences to Paul’s family and friends.

I first met Paul when he was best friends with my cousin John, I remember many happy times at Thornhill Road and also at my house with John Ella and Vin. I bumped into Paul in Chorlton a few times over the years he was always friendly and very chatty. He alway spoke about his boys. He will be sadly missed.

I first met Paul and Maggie when I moved to Stretford in 1983 and almost immediately got involved in a campaign to try and save the historic building of Longford Hall (the former home of John Rylands) in which Paul played a major part. We battled against Trafford Council who were determined to dispose of the Hall for commercial gain or knock it down. During eight years we won many battles, but eventually lost the war, but Paul played a major part in this and became an important friend, although I saw less of him when Sarah and I move moved to Styal in Cheshire. Paul was very good company (particularly over a few beers) but was was also one of the most hard-working people i have known, particularly battling through the ups and downs of life. We shall miss him.

A dear Uncle who will be very missed. Thinking of you all. Sending love Auntie Maggie, ‘the boys’ and your families X x x

We sadly never met Paul in person but he helped John out with a case and was our saviour. A bit of a David and Goliath scenario but he helped us to win and we will always be eternally grateful. Our only regret is that we never met him in person. Paul had hoped to come to Northumberland and we were going to go to Lindisfarne but sadly this was not meant to be. RIP Paul. X

I became friends with Paul through going to school with Patrick. Very early on I realised what a kind man Paul was when I fell off my back riding down Cromwell Road. He instinctively understood my great embarrassment and made me feel better about what had happened rather than teasing me as other older men might have. Our friendship grew as my relationship with Paddy waxed and waned. He took the responsibility for repaying the money I was owed for the 2005 trip around Eastern Europe – again confirming in my mind what a fundamentally decent person he was. In 2013, it was to him I turned when I had been unfairly dismissed from a job. Over the following nine months he guided me and a colleague through the tribunal process for a much reduced fee. I learned a lot about the law as we marched onwards to victory and a substantial out of court settlement. By this time he was having health troubles and I took greater interest in his well being. I was glad to visit him at Sark road and in Levenshulme on many occasions and have tea with him. Many stimulating political discussions were had and even though our views diverged significantly on some matters, he was never judgemental. About six months ago we had an unfortunate falling out about something but I am happy to say we made friends again before the recent bad news. I had hoped to interest him in Chinese medicine and I had written “Paul ok?” in my planner about ten times but kept moving back the date to give him a ring. It’s always the way – you think they will be there forever until the time theyre not. I miss him already. He had his faults like we all do but the world is a poorer place for losing his innate sense of justice and his great accumulated experience. I am grateful to have known him and to have learned from him. I wish his sons, Maggie, his grandchildren and his family all the best at this time. You are in my prayers. Phil

Dear Paddy, Ciaran, Ruaidhri and Connor, so sorry to hear about your Dad. Hope you are all doing ok. Good night, God bless Uncle Paul xx

Paul was a kind and generous man, loved by his family and friends alike. It was a pleasure to know him and I wish everyone happy memories of his warmth and thoughtfulness.