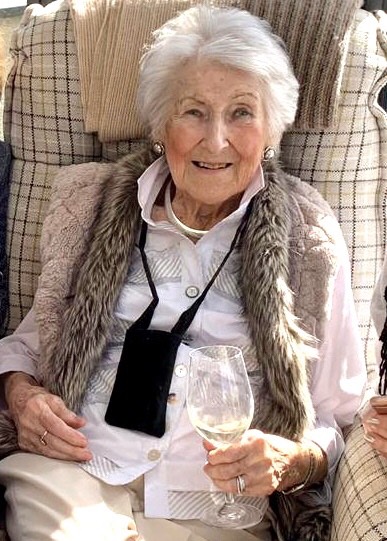 Service Details:
A celebration of Maureen's life will be held at Whalley Methodist Church, 80 King St, Whalley BB7 9SN. All are welcome. Black attire not essential.

On 16th May 2019 peacefully in Manor House, Chatburn, Maureen aged 89 years of Whalley. The dearly loved wife of the late Alan, much loved mother of Peter, Hilary and the late Ann.

Born in 1930 in Accrington Maureen attended Peel Park Primary, walking to school alone on her third birthday!  She achieved a scholarship to Accrington High School in 1941 which was tinged with sadness as her father left to join the RAF at the same time.  He bought her a “wearwell” two wheeler for her efforts.

Aged 16 she left school and joined the family business at 19 Warner street that had been started by her uncle, Moses Coupe.  He did deliveries in a motorbike and sidecar and after an accident her father Albert Harrison forewent a planned emigration to Buenos Aires working for Fray Bentos and joined the business.

Maureen married Alan Cookson, the youngest son of close family friends, aged 18, and left Albert Harrisons in 1950 when pregnant with her first child, Ann.  Eighteen months later, Peter was born and in 1956 Maureen decided she wanted to open at shop in Whalley to put “jam on the bread”.

47 King street was  purchased and consisted of two rooms with the family living in the rest of the building.

The shop was a drapers and haberdashery shop – and quickly grew.  The family moved out into a house in Whalley and the whole building was turned over to retail  and when in 1960 Alan Cookson was diagnosed with bowel cancer whilst Maureen was pregnant with her third child, Hilary; the decision was made that this had to become a career as she was likely to be a widow aged 30 with three young children.

Alan recovered well from surgery, but then the seed was sown and Maureen had a taste for Whalley and fashion.

In 1974 they moved to the central unit of the then derelict Coop shop on George street with the infamous Ace of Spades nightclub on the first floor.  Over the years all parts of the building were acquired from landlord and friend Fred Haydock and developed. Alan joined the business and Hilary followed in 1979.  The business grew into one of the countries largest fashion independent stores and won many accolades in the industry.

Maureen retired in 1995 when daughter Hilary and her husband Henry took over the business.

Her final three years were in the care of Manor House Chatburn.

A true embodiment of a life well lived.

Family flowers only please and donations in memory of Maureen to Whalley Methodist Church.