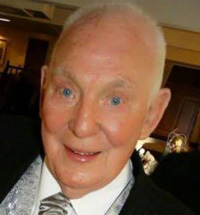 Service Details:
The service to celebrate Ken's life followed by cremation will take place at Accrington Crematorium, Burnley Road, Accrington BB5 6HA with the attendance of the Royal British Legion

On 9th November 2016 peacefully in hospital, Ken aged 81 years of Clayton-le-Moors.  Much loved husband of Edith, devoted dad of Lynne and son-in-law Nigel, wonderful grandad to Christopher and Gemma, dear brother-in-law to Joan, and uncle to Gareth and Gillian.

Ken was a very proud, upright and hardworking gentleman.  Having served in the 16th/5th Queen’s Royal Lancers for 22 years he then worked for the Lancashire Police in Accrington as a Prison Van Driver before his retirement. Ken had also been a devoted and active Freemason for 30 years and twice Grand Master.  In his spare time Ken enjoyed caravanning in the UK with Edith. He was an avid reader of war books and loved to watch war films and westerns whilst smoking his pipe with the cat sitting on his knee. He particularly liked to reminisce about his army days and never missed a re-union. He loved steak pudding and chips and thoroughly enjoyed a gin and tonic. Ken was a wonderful and definite character. He seemed to know everyone and was very popular amongst his friends and enjoyed his pint of mild.