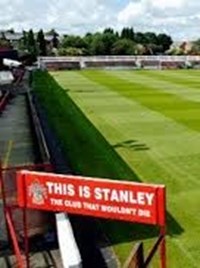 Suddenly at his home on 3rd November 2016 Jim aged 81 years of Accrington and formerly of Oswaldtwistle.  The dearly loved and devoted dad of Joan, Susan and Alec, dear father-in-law of Martin, Amanda, and the late Peter, cherished grandad of Christopher, Charlotte, Kerry-Rose, Alfie, Orla, great grandad of Harlow, dear brother-in-law and uncle.

Jim was brought up at Sough Lane Farm, Guide where he helped with the family poultry business.  In later years he became a well known and well respected local shop owner having formerly been the owner of Shaws Newsagents on Union Road in Oswaldtwistle.  He was also a Groundsman at Accrington Stanley Football Club from 1986 until his retirement aged 67 years.  He loved his work and his sports and had been  a keen supporter of Blackburn Rovers and enjoyed attending the matches.. A DIY enthusiast, Jim could turn his hand to any job and was always happy to help out the family.  He was a private man who liked to keep himself to himself but would always put others first.