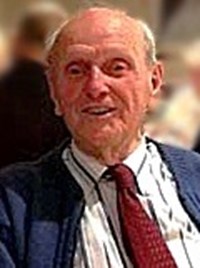 Peacefully in hospital on 12th April 2018, Edward aged 103 years of Accrington. The devoted husband of the late Mary. Edward leaves his dear niece Dorothy and also many friends.

Edward ran his own printing business for many years in Rossendale. Prior to that, he had served in the army during World War 2 and fought at Monte Cassino. He was very proud of his service to his country and often told many stories about his service days. Edward was a lifelong member of Accrington Cricket club which he enjoyed along with his wife Mary. He was a member of the committee there and spent many hours watching his team play. Ted was also an active Freemason at the Masonic Lodge of Amity & Rossendale Forest No. 283 for over 40 years. He was a true character with a strong opinion who said it how it was. He was very active and did all his own DIY and was even known to be up on the roof repairing his ridge tiles in his 90’s.

No flowers by request please and donations if desired in memory of Edward to the Accrington & District Blind Society.