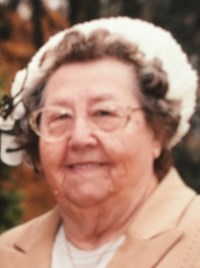 Mrs Edna Purvin beloved wife of Charles John Purvin for almost 66 years, passed away Friday morning peacefully at home with her family by her side. Edna was a devoted mother of Hilary, Jean and Andrew, a kind mother-in-law to Ian, Richard and Elizabeth, a much loved sister of Connie, the late Harry and Elsie and the most wonderful Grandma and Great Grandma.

Edna lived in Clayton-le-Moors all her life attending All Saints school and marrying John at All Saints Church on the 16th December 1950. Over the years she played an active part in the Church Life, teaching at Sunday School, enjoying being a member of the Mothers’ Union and regularly cleaning the Church brasses and flower arranging. As a young woman Edna worked as a weaver and at Clayton Laundry.  As her family grew she worked at English Electric and Wellfield HFE until her retirement.  As a family over the years, holidays camping and caravanning in Cornwall and Scotland (with St. Ives being a special place) were enjoyed by all.  As the years passed Edna found great pleasure in visiting her children, grandchildren and great grandchildren all over the British Isles.