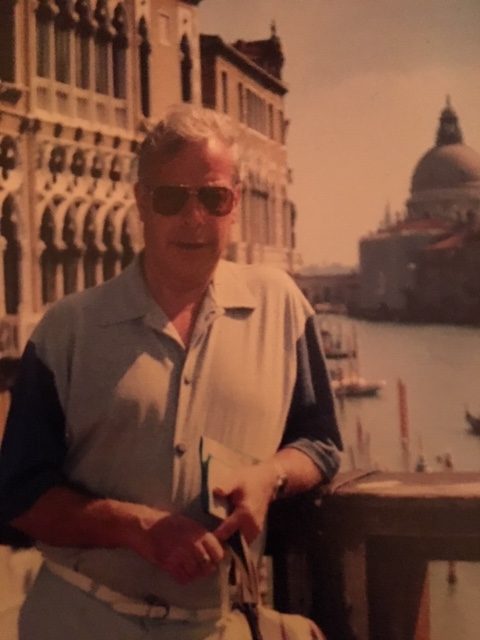 Of your charity please pray for the Repose of the Soul of Derek Vincent who passed away aged 88 years at Old Gates care home on Friday 31st July after a long battle with Parkinson’s disease bravely borne and fortified by the rites of Holy Mother Church.

Devoted husband of the late Marie Eileen, beloved father of Susan and Mark, father-in-law of Thomas and Christine, adored grandpa of Rebecca, Ryan, Rachel, Richard and Ruth, great-grandpa to twelve great-grandchildren and brother of the late Brian and the late Kevin.
‘You will be greatly missed and our lives will be forever changed. God Bless and Rest in Peace’

We come together today as a family, to mark the passing of a man that Susan and me were lucky enough to call father. Derek was the devoted husband of Marie for 64 years, father-in-law to Thomas and Christine, grandfather to Rebecca, Ryan, Rachel, Richard and Ruth, and great grandfather to 13 children.

Michael and Rose Behan gave the world three wonderful sons in Kevin, Brian and Derek. These sons gave us the Behan legacy and the O’ Doherty legacy. Today that legacy is stronger than ever, as in the interval since dad passed away, Richard and Emma have a new arrival – a baby boy called Finn Malachy, born on the 6th August, dad’s thirteenth great-grandchild.

Dad often told Susan that she was his favourite daughter. She was his only daughter, but still his favourite! Alas, no similar accolade was ever bestowed on me of being his favourite son. Also his only son! However, I was honoured while growing up with the term ‘nincompoop’! But, on a serious note, he often said, ‘Good lad, I’m proud of you.’’ He was immensely proud of his family.

Derek showed an early interest in saving money, as the story is told that when the three brothers were taken to the fair dad would jingle his pennies in his pocket, while watching Kevin and Brian jump on the horse ride and going gleefully round and round, before spending his own money. He thus got twice the enjoyment from the fair. This early prudence steered dad into a job with what was then called simply the savings bank, at Stacksteads.

Dad dutifully gave mum his earnings to parcel out accordingly, and she gave dad his daily bus fare to the bank and his sandwiches. Dad told the story that they had to be so frugal, that twice a day tea and biscuits were served in the bank upstairs and dad always had to decline. I told this story at the 50th wedding do, and dad said to me afterwards. ‘Do you mind, when you are telling people how poor we were, the tea and biscuits didn’t cost a penny, they cost a half-penny.’ In other words, we were poorer even than you made out!

But by being economical, mum and dad were able to move from 13 Kent Street to 22 Queen’s Road, and in 1970, dad’s potential as a manager having been recognised by the TSB , he was offered his first manager’s post at Mill Hill where he remained for 11 years until 1981, progressing the bank from a grade 3 to a grade 4 branch. A big promotion then came for dad to move to the Eanam branch in 1981, a grade 5 branch, before a further stepping stone up to a grade 6 branch in Chorley. Here, however, dad made an important decision, that even though he knew that he was being marked out for a grade 7 top level branch, he would rather work for a charity on secondment from the bank, and so he moved to be the FD for LNCT. He then took early retirement in the early nineties aged about 60.

When sister Susan was told aged six of the arrival of a baby brother, she admits to throwing a tantrum!

We all have many special memories of Derek. I recall a powerful moment when mum, dad and me visited Ireland in 1999 for the first and the only time. Standing on the deck with dad as the boat pulled into Dun Laoghaire was a special moment, as technically dad was 50% Irish, his great-grandfather having come from Ireland sometime between the two censuses of 1901 and 1911.

Other special memories are when I was at University in London. Dad often came down on Union business such as conferences for a stay over. We would eat out in the evening,

A man of many talents and modest habits, dad’s favourite game was snooker, and he allowed himself only one night off from family duties per week for 40 years from 1970 to 2010, when on a Tuesday evening he would go to St Mark’s con club in Witton for a few frames of snooker and a couple of glasses of beer.

Derek was a keen Rovers fan in his younger days. His dad Michael got him a ticket for the 1960 FA Cup Final between Rovers and Wolves, which Rovers duly lost. I am pleased to say his faith in Rovers returned under the Dalglish premiership winning tide in 1995.

A keen reader and lover of music, he liked all types of muaic but in particular classical and opera were his thing. He always said that Beethoven was the greatest. He loved Neapolitan tenors.

He could DIY just about anything, making gates for front and back of the house at Meadow Rise. His tool box was an encyclopaedic collection of gadgets both useful and bewildering. Mum and dad discovered caravaning, before they graduated to going abroad twice a year starting in the 80s and 90;s – in particular to Salao and Tossa der Mar in Spain. Dad once gave chase to a pickpocket who had snatched mum’s bag in Spain. Superdad! Venice (Lido de Jesolo) was a firm favourite also, a place which they visited three times.  In later years dad taught himself PCs and music, learning to play the Yamaha two manual organ he had bought.

The saying that such and such has the patience of a saint could never be applied to anyone more deserving than Derek. As mum said, he never raised his voice to anyone.

He never complained, even when sleep was occasionally disrupted after midnight by the police ringing to inform him that the alarm was going off in Mill Hill and, as manager, he had to drive down. Dad never swore either, allowing himself the odd mumble of ‘jeepers creepers’.

Apart from his colossal patience, dad was loving, kind, generous and also cared passionately about the plight of animals.

A Man who was very intelligent, mum always said that it was a shame that dad never had the chance to go to university, However he studied and passed his institute of chartered surveyors qualifications which he needed for his career.

Dad had a special brotherly bond with Brian. I found it touching that dad always called Brian on the phone ‘our kid’, as Brian wasn’t the kid of the family, Derek was.

To me, dad wasn’t just a dad. He was also a friend, brother, teacher and guide. Quite remarkable really. He slipped effortlessly in between these different roles.

Dad’s wonderful sense of humour persisted throughout his life. We all know that he wrote some sketches for two up and coming comedians on the radio in the 50’s – called Eric Morecambe and Ernie Wise. In the early 80’s dad and uncle Colin were frequent winners /contributors to the BBC Radio Lancashire limerick competition, and both had captions published in Punch magazine. Only about six years ago, dad was a runner up in a Sunday Times caption competition.

Dad spoke,  as dads often do, a vocabulary all his own. Some of my favourites are contraption’, ‘funnyossity’, ‘slacks’, ‘yakkum’ and ’spifflicate’. A contraption is a machine when you are not sure either what it is or how indeed it works if at all.
A funnyossity can be applied to just about anything, especially an uneven bit of wall that jutted out when you were decorating. Slacks were casual trousers. Yakkum was aftershave, and spifflicate was a good humoured threat, that if you didn’t do something, he would spifflicate you!’

Perhaps I owe my love of poetry to dad, who often spoke to me in rhyme when younger eg ‘When God gave out brains /You thought he said trains/And you missed yours.’

‘When God gave out noses/ You thought he said roses,

And you asked for a big red one’.

Yes I do have the Behan nose, It is a very distinctive beak! Only select members of the family can lay claim to having the Behan hook!

Even his favourite daughter had specially composed poems. ‘Oh Susan you’re  a funny un/You’ve a face like a pickled onion/You’ve a nose like a squashed tomato/And eyes like green peas.’

There was always a quick-witted response to anything, as for instance when I introduced dad to Sr. Margaret Mary of the parish group. Sr, Margaret said to dad, ‘You son is a son and a half’. Dad smiled gently and said ‘Oh do you mean in size?’

Dad was diagnosed with Parkinson’s in November 2016, and never once was heard to complain. He soldiered on. Unfortunately, as the disease progressed, if dad tried to write something down on paper, he told me about ‘the cloud that came over his head’. He fought on courageously right until the very end.

‘I read of a man who stood to speak at a funeral of a friend. He referred to the dates on the tombstone from the beginning… to the end.

He noted that first came the date of birth and spoke of the following date with tears, but he said what mattered most of all was the dash between those years.

For that dash represents all the time they spent alive on earth and now only those who loved them know what that little line is worth.’

Dad’s dash was a long life, well -lived. He was a gentle man, and his passing leaves an immense void.

Please feel free to leave a message for Derek’s online memorial book by completing the form below.