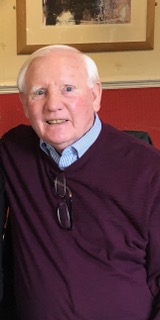 Service Details:
Due to current restrictions a private family funeral service and cremation will be held at Accrington Crematorium.

Following a short illness on 23rd October 2020 in hospital, Alan aged 80 years of Great Harwood. The devoted and much loved husband and best friend of Marion, loving dad of Steven and Michael and their partners Julie and Sue, cherished grandad of Oliver, Amy and Annie, dear brother of John and also a well respected relative and friend to many.
Alan was born on 8th December 1939, the youngest of five children, having two brothers Ernie and John and sisters Kathleen and Ruth. He had a happy childhood sharing many adventures with his best friend Marshall. He used to help his Uncle with woodworking projects and knew from a young age that that was what what he wanted to do when he left school, so at 15 he got his first job as a joiner and served his apprenticeship. At the age of 23 he became Maintenance Joiner at Padiham Power Station, happily working there for nearly 30 years until he took voluntary redundancy and started his own business.
He met Marion at a dance in Blackburn and they were married in 1965. Alan became a proud father when their son Steven arrived in 1969, followed by Michael in 1971. They were a happy, loving, close family and spent many holidays touring Britain in their caravan. They also enjoyed country walks, especially in the Yorkshire Dales.
Alan loved sport, whether participating or watching on TV. He had played table tennis, snooker, badminton and was a keen angler, bringing home many a trout and salmon. He was also a member of Great Harwood Golf Club, winning several trophies, but had to resign in recent years because of arthritis. Another of Alan’s interests was gardening and together with Marion they grew fruit and veg on their allotment for many years. He also enjoyed cooking and Christmas Day was very special in the Owen household when Alan took charge of cooking the turkey and trimmings for all the family who gathered at their house.
Alan adored his three grandchildren, Oliver, Amy and Annie and loved taking them out on day trips and keeping them amused with his funny stories and songs – hence the song playing when we came in – Catch a Falling Star, which they all used to sing as small children.
Alan was a lovely, gentle, quiet man with a dry sense of humour who will be greatly missed by Marion, his loving wife and friend for over 55 years and by his family, Steven and Julie, Michael and Sue, leaving a huge void in all their lives.

Family flowers only please, donations are being received in Alan’s memory on behalf of North West Air Ambulance, to make a donation please click the ‘Make a Donation’ button at the bottom of this page.

Please feel free to leave a message for Alan’s online memorial book by completing the form below.

MESSAGES for the family of Alan Owen

Such sad news, Thinking of you Marion, condolences to all your family.

I have nothing but the fondest memories of Uncle Alan and I am so sad and sorry for Marion and all the family.